The taxi station is located next to train track 1. Taxi Göteborg operates lane 1 (closest to the train track).

At Gothenburg Central Station there is a special taxi queuing system: Select Taxi Göteborg on the screen next to the taxi station. A queue note with taxi number is fed out. Take the queue tag and go to the taxi that has the same number as your queue tag. 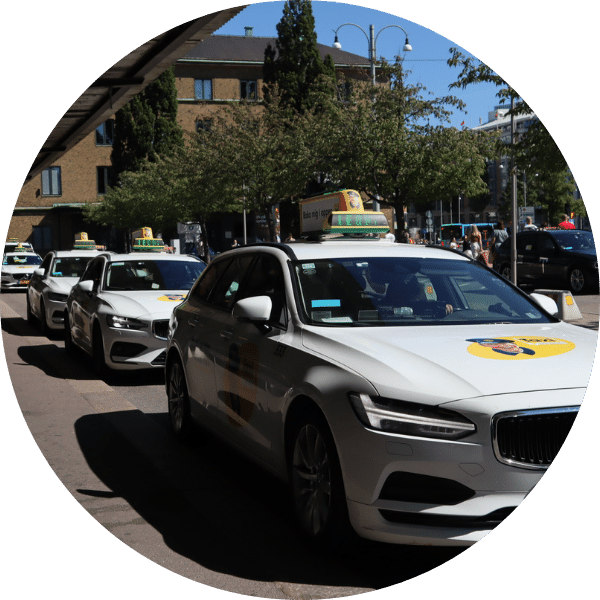 If you need help, The Central Station's own taxi hosts are often on hand. If the queue app system is not working you can always choose any Taxi Göteborg car in lane 1, regardless of whether it is first in line or not.

Note that Jernhusens surcharge is charged at each departure from the taxi station at Gothenburg Central Station.

If you pre-order a taxi from Gothenburg Central Station, we will pick you up at Burggrevegatan 4, at track 1. Then no additional fee will be charged.

Visitors to Svenska Mässan is referred to the taxi service at Hotel Gothia Towers entrance. Taxi hosts, from the companies that have permission from the hotel to pick up and drop off, are on site during peak hours.

Taxi Gothenburg's berth is in the car park, next to the ferry terminal. Follow the signs from the terminal, via an indoor "footbridge", into the car park. The berth is signposted with our logo.

The taxi rank at Stena Line's Germany terminal is outside the main entrance. So just get off the boat and straight into the taxi.

The nearest taxi rank is on Storgatan. Taxi service is also available at Stora Teatern (before Kungsportsbron). There are taxi ranks along Södra vägen 9-13.

To the Customer Portal
FAQ
Do you have a fixed price and how can I find out a price for a taxi ride between two addresses?
Can I pre-order a taxi?
Can I book several stops on my trip in the app?
I forgot something in the taxi, what do I do?
Are there different taximeter prices, depending on which time you travel?
Can I order a taxi with an infant car seat?
Can I get my trip on an invoice?
Are you allowed to bring pets in your taxis?
I have cancelled my trip, when will I recieve my refund?